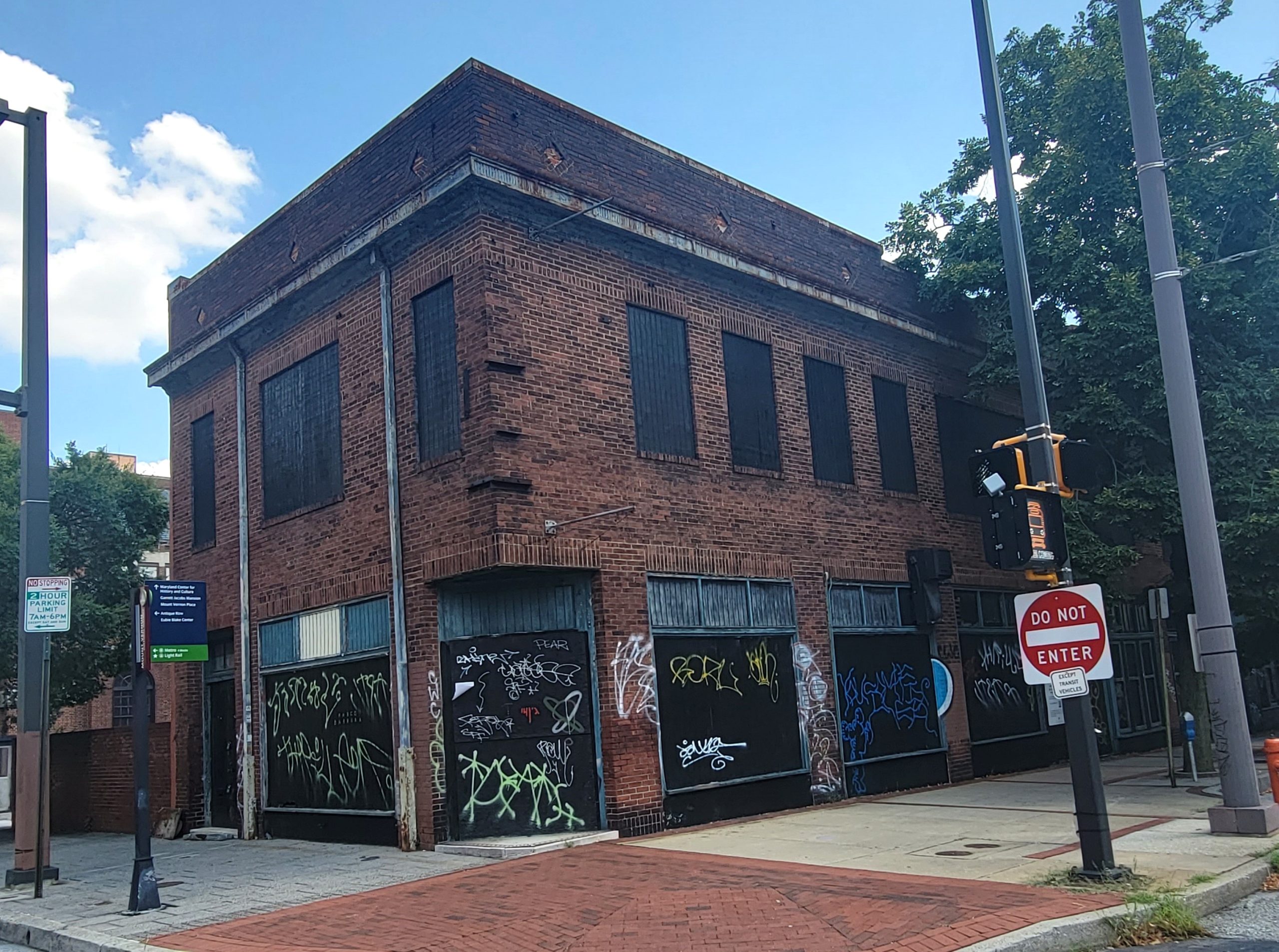 One year after selling the former Greyhound bus station for redevelopment, the Maryland Center for History and Culture is parting with another parcel on Howard Street.

This time it’s two brick buildings in the 600 block of North Howard Street that started out as commercial properties and most recently have been used as storage by the non-profit history center, previously known as the Maryland Historical Society.

Baltimore’s Planning Commission is scheduled this week to consider an application to subdivide the Howard Street property from the rest of the Maryland Center for History and Culture campus so it can be redeveloped as nine apartments.

The proposal, on the commission’s consent agenda, marks the second time in two years that the Maryland Center for History and Culture has moved to downsize its campus, after selling the former Greyhound bus station at 601 N. Howard Street to Baltimore SquashWise in May 2021.

The request for a “minor subdivision” comes less than a year after the Walters Art Museum sold apartment buildings at 606, 608 and 610 Cathedral Street to a private developer, Chasen Companies, for continued residential use.

The brick buildings occupy the east side of Howard Street from the former bus station to Monument Street, steps from a light rail stop. Because the buildings have been used for storage and have no openings on Howard Street, they add little life to the corridor, creating something of a dead zone between Antique Row to the north and Market Center to the south. The proposed development will bring more activity to the area while the sale adds buildings to the city’s tax roll.

The Maryland Center for History and Culture occupies most of the city block bounded by Monument, Howard and Centre streets and Park Avenue. The subdivision is needed so it can transfer the Howard Street property to a new owner.

The developer is Alan Garada and the architects are Ward Bucher and Joseph Wojciechowski of Encore Sustainable Architects. A sale price has not been disclosed.

The commission meeting starts on Thursday, July 21, at 1 p. m. at 417 E. Fayette St. Because the property is in a historic district, any changes to the building’s exterior would need approval from Baltimore’s Commission for Historical and Architectural Preservation.

On the planning commission’s agenda, the land to be subdivided was listed as 201 W. Monument St., which is the location of the Enoch Pratt House, former home of wealthy merchant and philanthropist Enoch Pratt and also part of the history campus.

Pratt is associated with several local institutions, including the First Unitarian Church of Baltimore, Sheppard Pratt Hospital and the Enoch Pratt Free Library.

According to Baltimore Heritage, a preservation advocacy group, Pratt began building a three-story mansion at 201 W. Monument St. for himself and his wife in 1844, the same year the Maryland Historical Society was founded. In 1868, working with noted architect Edmund Lind, he added a marble portico and a fourth floor with a Mansard-style roof.

Enoch Pratt died in 1896, and his wife remained in the house until her death in 1911. The Maryland Historical Society acquired the property in 1919.

Mark Letzer, president and CEO of the Maryland Center for History and Culture, said his organization has no plans to sell the Enoch Pratt House.

The Howard Street parcel is one of four in the city that owners want to subdivide for redevelopment.

MCB Real Estate’s apartment project in the 4500 block of Harford Road will represent an investment of $50 million, representative Amy Bonitz said in a recent virtual information session with members of the Lauraville Improvement Association.

Plans unveiled last month call for a four-story, 147-unit apartment building housing about 400 to 450 people and targeted for completion in 2025. A second phase involves the redevelopment of a historic structure on the site called the Markley Building. Historic preservationist Dale Green is researching the history of the Markley Building to help determine the best use for it, Bonitz said.

Peggy Daidakis will step down as executive director of the Baltimore Convention Center on Sept. 1, ending 49 years with Baltimore City government.

Daidakis joined the staff of former Mayor William Donald Schaefer in 1973 and served in his administration for four years. In 1978, Schaefer assigned Daidakis to be part of the team opening the convention center in 1979, with Eugene Beckerle as the first director. In 1986, former Mayor Clarence “Du” Burns named her executive director, making her the first female director of a national convention center in the United States.

During her tenure, Daidakis has helped the convention center expand so it is now three times its original size, making it the largest meetings and exhibition venue in Maryland. She oversees a full-time staff of more than 150. In 2013, she was inducted into the Convention Industry Council’s Hall of Leaders, one of the highest honors in the hospitality industry.

Deputy Mayor Ted Carter will work with the city’s Department of Human Resources to identify her successor.

The wait for a new Red Emma’s Bookstore Coffeehouse is almost over.

Operators of the store at 3128 Greenmount Ave. in Waverly have started to schedule book launches and other gatherings on site, in preparation for its grand opening.

On July 20 at 7 p.m., they’re having a book launch with Dr. Zackary Berger, author of “Health for Everyone: A Guide to Politically and Socially Progressive Healthcare.” On Sept. 22, they’ll welcome Psyche A. Williams-Forson, speaking about her book “Eating While Black: Food Shaming and Race in America.”

The Greenmount Avenue store replaces the former Red Emma’s location at 1225 Cathedral St. According to the Red Emma’s website, it will officially open in late summer.

“We can’t wait to open for food, coffee and books,” said an announcement sent out Tuesday related to this week’s book launch. “It will be happening really soon.”

Jimmy Rouse at The Village of Cross Keys

In the 1960s, developer James Rouse created the mixed-use community known as The Village of Cross Keys off the 5100 block of Falls Road in Baltimore as a prototype for the much larger “new town” of Columbia, Maryland that he launched later in the decade.

This month one of Rouse’s sons, artist Jimmy Rouse, is coming to Cross Keys with a solo exhibition of his paintings, prints and woodcuts. The show opens July 25 and runs until Oct. 21 in the gallery space at Monument Sotheby’s International Realty office, 42 Village Square at Cross Keys, 5100 Falls Road. Gallery hours are Monday to Friday, 9 a.m. to 5 p.m. A reception with the artist will be held on Thursday, Aug. 18, from 4 to 6 p. m.

Riverstone at Owings Mills, a 324-unit apartment community at 4700 Riverstone Drive in Baltimore County, has been sold for $92.9 million to Carter Funds. The seller was Continental Realty, which bought it in 2016 for $61.6 million.

On Wednesday, July 20, at 6 p.m., Jubilee Baltimore will hold a Zoom Forum regarding a proposal to reduce property taxes in Baltimore City. The forum is intended to give people a way to learn about the grassroots referendum petition effort to amend the Baltimore City Charter this November.

Charles Duff, president of Jubilee Baltimore, will be the moderator. Speakers will be Andre Davis, a representative of Renew Baltimore, speaking in favor of the proposal, and John Kern of the Stop Oppressive Seizures (SOS) Fund, who will speak in opposition. Panelists’ questions and a general Q&A period will follow. Here is a link to the meeting, which is expected to last an hour.

Ed Gunts is a local freelance writer and the former architecture critic for The Baltimore Sun.